Even though tumor ablation, in one form or another, has been in clinical practice for more than 20 years, the lack of prospective randomized studies has been a source of frustration for interventional radiologists. Many factors have contributed to this problem, including the lack of funding (tumor ablation is far less profitable than systemic chemotherapy), the perceived threat to other specialties (resulting in limited referrals), and the generalized unawareness among the primary care or even oncologic community about tumor ablation.

During the last few years, however, many of these obstacles have been overcome. For example, the accumulation of results from many smaller studies has countered to a significant degree the effect of the lack of large prospective randomized studies. Even though the perceived threat to other specialties persists, more referrals are apparently being made, as an aging population represents a larger nonsurgical pool. Additionally, the dissemination of information about these treatment options by word of mouth and more significantly via the Internet resulted in a significant increase in self-referrals. But what is most important from a scientific point of view is that all the published studies—even though each one is relatively small in number of subjects—have consistently demonstrated nearly identical results regarding the efficacy and safety of percutaneous tumor ablation.

Whether novice or seasoned, the practitioner must be acquainted with the current literature regarding the safety and efficacy of percutaneous tumor ablation as well as the relevant outcomes of other competing treatment options, such as external radiation, systemic chemotherapy, and resection. The four tables included in this chapter summarize the safety and efficacy data on percutaneous tumor ablation as of the time of writing; however, practitioners must always update their knowledge.

Pending the results of the American College of Surgeons Oncology Group (ACOSOG) prospective randomized multicenter trial comparing surgical resection to percutaneous radiofrequency ablation (RFA), pulmonary ablation for primary lung cancer should be offered to patients who are not candidates for surgical resection. Primary lesion size of ≤3 cm is strongly correlated with a complete response. Lesions of >3 to 5 cm can also be targeted with RFA; however, long-term disease control is not as good, with reported complete response rates of between 30 and 60%. Lesions larger than 5 cm rarely show a complete response after RFA, and the decision to treat should be based on the specific clinical scenario (Table 10.1).1–4 Noncurative ablation may be offered in certain other cases:

Liver transplantation for hepatocellular carcinoma (HCC) yields the best chance for cure, with more than 70% survival at 5 years. However, fewer than 10% of patients are transplant candidates at presentation. Surgery and ablation are considered curative options; still those who are candidates for such procedures are in the minority. For lesions larger than 5 cm, surgical resection is superior both for primary liver cancer (HCC) as well as for metastatic disease, mainly colorectal carcinoma.5 Data for lesions smaller than 5 cm are contradictory, with many studies suggesting that ablation and surgical resection offer similar recurrence rates and survival. Such data are stronger for HCC ≤3 cm, which has helped popularize RFA both in the intraoperative and the image-guided settings.6–8 In deciding between resection and ablation, the physician must take into account the patient’s comorbid conditions and the prognosis related to the cirrhosis. Moderate to advanced cirrhosis argues for ablation, as surgical risks increase and expected survival benefit decreases. Table 10.2 summarizes the important studies related to liver cancer ablation.

Even though there are fewer studies on percutaneous ablation for renal cell carcinoma (RCC), they all show remarkable similarities with respect to efficacy and safety data. Almost universally, and irrespective of method of ablation (RFA or cryoablation), efficacy for RCCs ≤4 cm is nearly 100%, and the reported rate of significant complications is around 6%. Such patients are selected based on the size, location, and percutaneous accessibility of the RCC; nonetheless, the consistency of the data has propelled percutaneous ablation for RCC into clinical practice. Comparative data for RFA versus cryoablation are limited, with recent evidence suggesting that cryoablation is associated with a lower recurrence rate and fewer significant complications.9–11 As of now, and because long-term data on percutaneous ablation are lacking, the gold standard treatment for RCC remains nephron-sparing surgery. Patients who are not operative candidates, are predialysis, or have bilateral tumors or syndromes that place them at high risk for meta-chronous lesions are the ideal candidates for percutaneous ablations. Many patients who do not belong to any of the above categories still opt for percutaneous ablation due to the high efficacy rates12,13 and the fact that possible failure of ablation does not necessarily preclude surgical treatment (Table 10.3).

There is very strong evidence that ablation of painful osseous lesions is effective in reducing pain.14–17 Such evidence is limited to lytic osseous metastatic lesions, with data lacking in osteoblastic lesions. efficacy is not related to lesion size but rather to technique, with ablation being more effective for patients with localized, reproducible pain and in those in whom the affected periosteum can be targeted. There is limited evidence that cryoablation is more effective than RFA, with a shorter time to pain reduction.18 The evidence includes patients with pain refractory to regular treatments such as analgesics and radiation. Evidence is strong that RFA is nearly 100% effective for the treatment of osteoid osteomas, with studies showing complete and prolonged response after one treatment. RFA is currently the standard treatment for osteoid osteoma (Table 10.4).15

Figure 10.1 shows the relative complete response rates for primary lung, liver, and renal cancer based on the latest published studies.

There is very strong evidence regarding the efficacy of RFA for the treatment of HCCs that are ≤3 cm. There is weak evidence that combination treatment with transarterial chemoembolization may result in lower local recurrence rates and improved survival. Strong evidence exists that ablation for lesions larger than 5 cm does not offer survival benefit, unless combined with other treatments.

There is strong evidence, based mostly on retrospective studies, that RFA has a high efficacy rate and improves survival in patients with primary lung cancer ≤3 cm. A prospective randomized multicenter trial is currently under way comparing resection versus RFA for stage 1A lung cancer.

There is strong evidence, despite a lack of randomized prospective studies, that RFA has a very high efficacy (90–100%) for the treatment of RCC. This high efficacy rate is for lesions ≤4 cm that are percutaneously approachable.

Moderately convincing evidence exists for the palliation of pain due to osseous metastatic lesions. The studies suffer from the lack of uniformity in patient selection, pain measurement, and technique. There is very strong evidence that RFA is nearly 100% effective for the treatment of osteoid osteoma.

There is very strong evidence that microwave ablation (MWA) mirrors the efficacy and safety of RFA in all organs, including lung, liver, kidney, and musculoskeletal. However, there is a paucity of studies directly comparing it with RFA, which limits the use of MWA at this point. Advantages of MWA include the reported larger ablation zones, less susceptibility to the “heat-sink” effect, and the lack of need for grounding pads.

There is very strong evidence that percutaneous cryoablation is safe and effective for the treatment of RCC. Such data are limited to lesions ≤4 cm, though some studies have included lesions up to 7 cm with similar outcomes. A couple of prospective but not randomized studies also show high efficacy (in the mid-90% range) for up to 3-year follow-up. Five-year follow-up data are lacking. 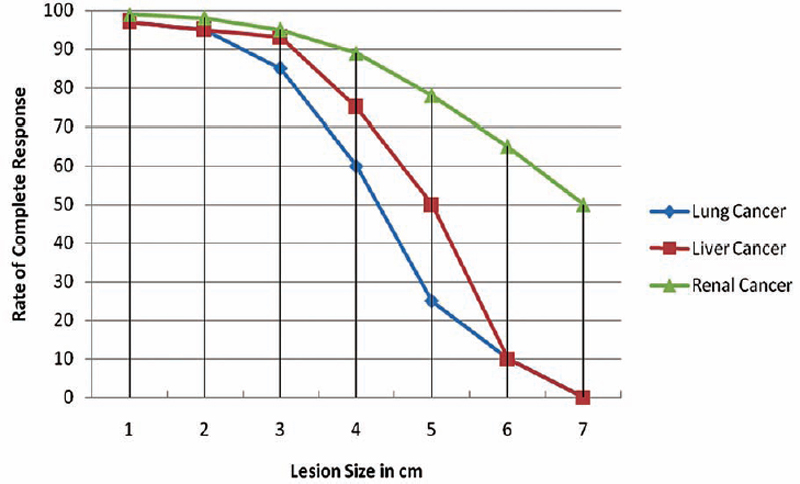 Fig. 10.1 Complete postablation response rates for lung, liver, and renal cancer relative to lesion size. Lung cancer studies show a reproducible, precipitous drop in efficacy for lesions >4 cm. A similar response curve is noted for ablation of liver cancer. In the case of the latter, some studies indicate equivalent response rates and disease-specific survival compared with surgical resection for lesions <5 cm. Better postablation results, especially for intermediate-size lesions, are reported for renal cancer. This is due to the excellent results published on cryoablation for renal cell cancer, a modality that allows for the use of multiple probes simultaneously and staging treatment over more than one ablation.

< div class='tao-gold-member'>
Only gold members can continue reading. Log In or Register to continue