The Most Common Benign Lesions and Their Borderline and Malignant Counterparts 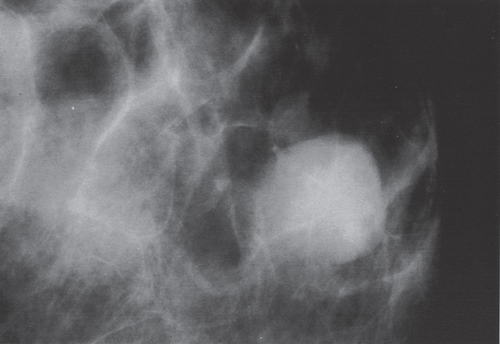 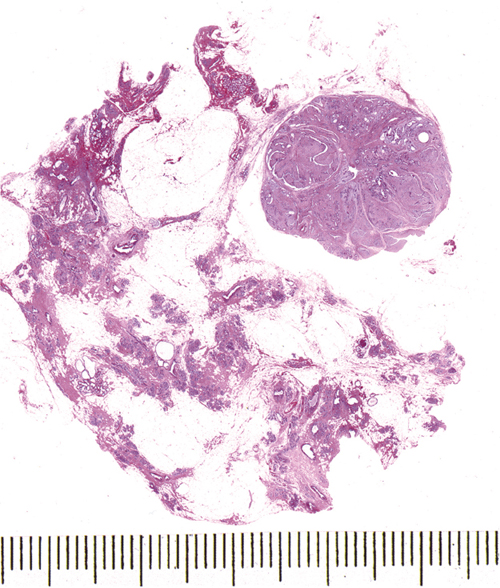 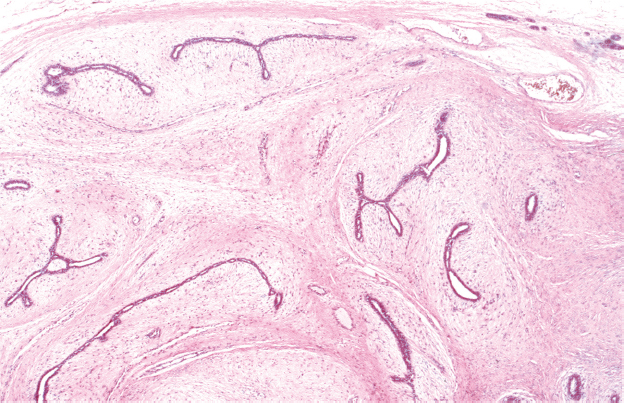 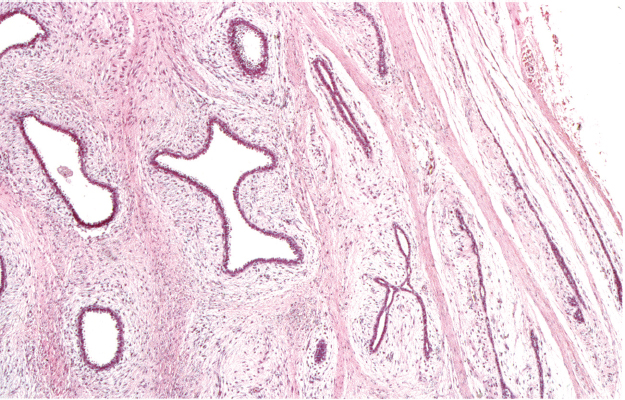 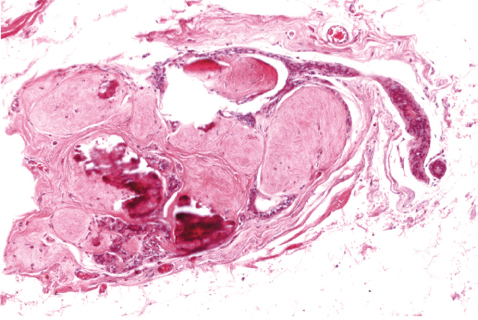 Fibroadenoma (Figs. 6.1 and 6.2) is a very common benign epithelial-stromal tumor mainly containing proliferated elements of the intralobular active stroma, but also featuring proliferated ducts and acini. The epithelial component is distorted in the so-called intracanalicular variant (Fig. 6.3) and more regular in “pericanalicular” fibroadenoma (Fig. 6.4). The epithelial component may exhibit hyperplastic or metaplastic changes. The stroma of the younger lesion is mucin-rich and becomes more fibrous over time. Fibroadenoma is usually a palpable lesion, but in about 10% of the cases, it is detected on the basis of amorphous stromal microcalcifications (Fig. 6.5) seen on the mammogram. Fibroadenoma represents a clinically detectable phase of fibroadenomatoid change (see Chapter 1). 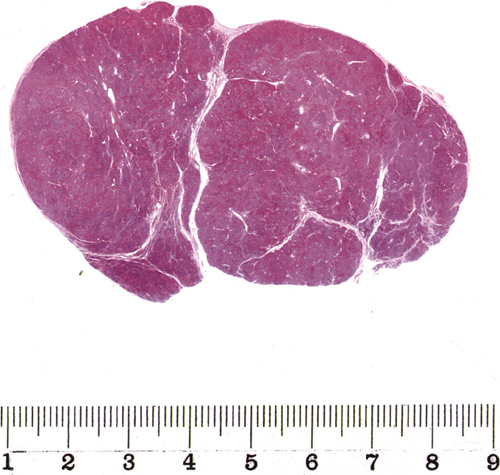 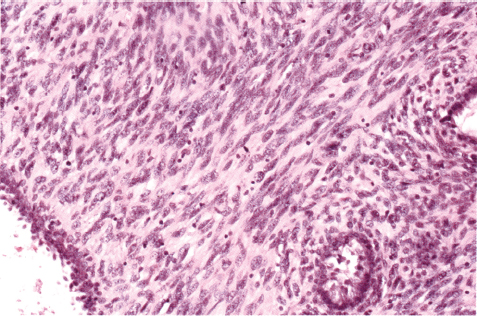 The stroma in a fibroadenoma is poorly cellular and mitotically almost inactive. The “juvenile” variant of fibroadenoma is a more rapidly growing round or oval lesion that has a more cellular stroma with some mitotic figures (Fig. 6.6).

The term “phylloides tumor” designates a group of epithelial-stromal neoplasms with dominating stroma and leaf-like structures (Figs. 6.7 and 6.8). The stroma in these lesions is more cellular and mitotically active, even in benign cases. An occurrence of more than five mitoses per ten high power fields is considered as an indicator of low malignant potential (“phylloides tumor of borderline malignancy”) with a tendency to recur. Lesions with obvious stromal cellular atypia and high mitotic activity are rare and malignant. They may contain heterologeous stromal components (e.g., liposarcoma, rhabdomyosarcoma, or osteosarcoma). 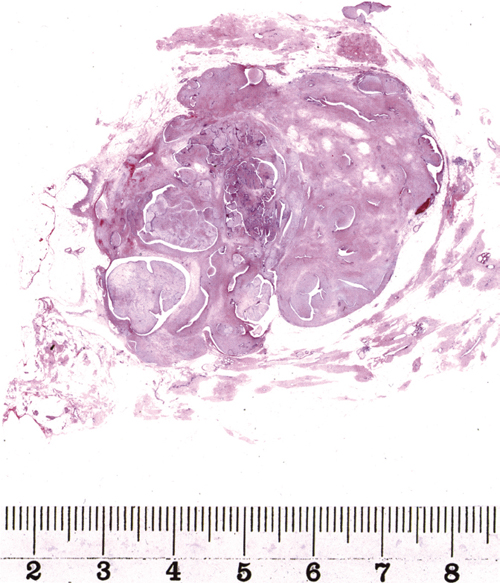 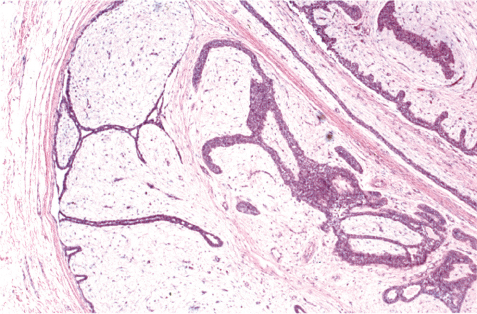 The most important issue in this group of lesions is the potential risk of overdiagnosis. In the presence of a growing palpable mass, usually in younger women, a cellular fine-needle aspirate may lead to an erroneous preoperative diagnosis of malignancy. Core biopsy usually rules out the possibility of carcinoma and detects the rare borderline and malignant variants of these tumors. 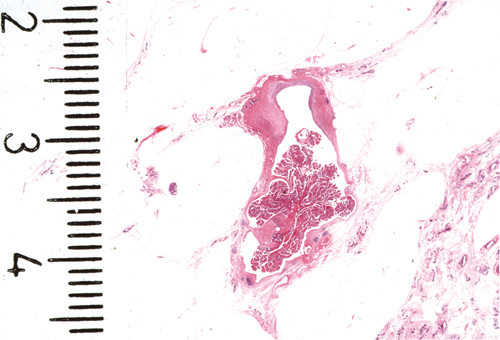 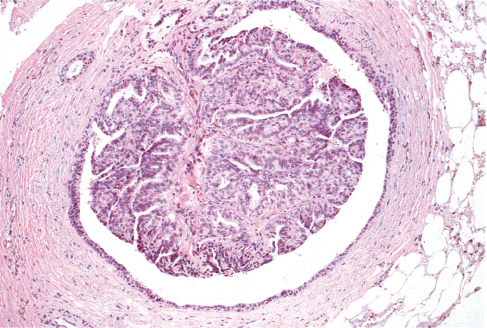 One of the few lesions that originate outside the terminal ductal-lobular unit (TDLU) is a papilloma. It usually develops in larger ducts in the retroareolar area and often causes serous or bloody nipple discharge. Papillomas are exophytic lesions that fill the lumen of the dilated duct (Fig. 6.10) and contain a branching fibrous central core (Fig. 6.11 and 6.12). 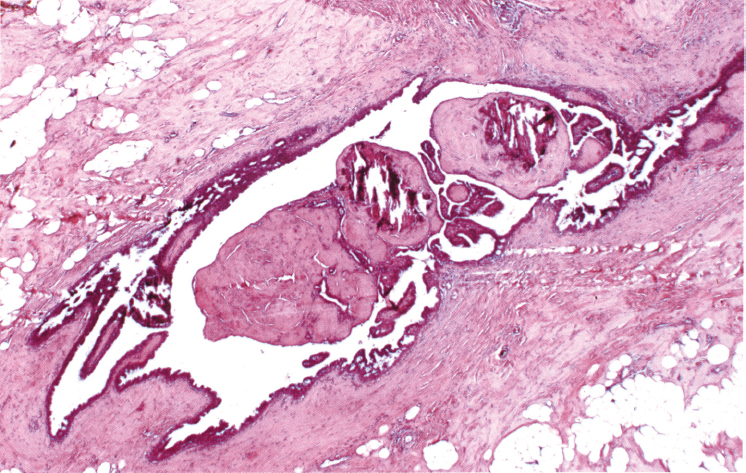 The stroma of elderly papillomas may calcify (Fig. 6.13) and appear as a cluster of calcifications on the mammogram. However, the radiologic method of choice in detecting papillary lesions is galactography (Fig. 6.14). 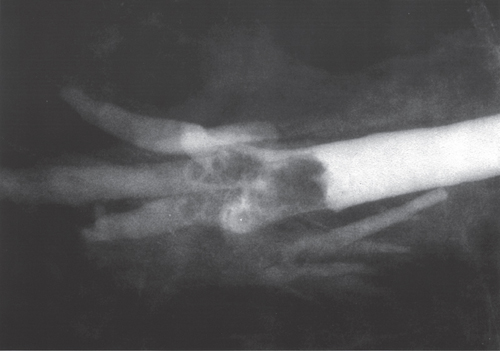 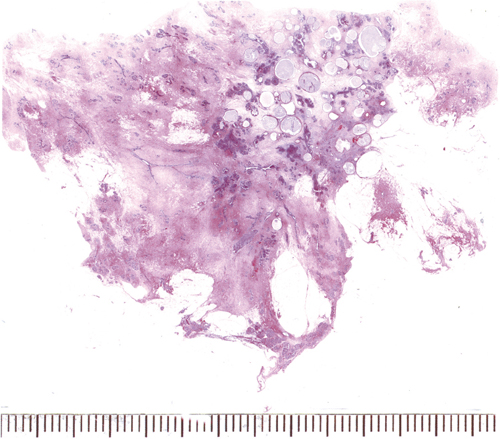 Papillomas may be solitary or multiple. Sometimes in young women multiple papillomas appear in a fibrocystic area of the breast tissue. This is referred to as “juvenile papillomatosis” (Fig. 6.15). 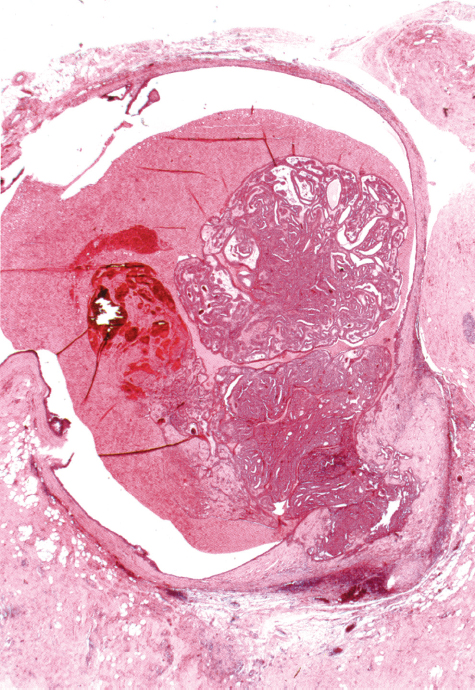 
Only gold members can continue reading. Log In or Register to continue

Tags: Practical Breast Pathology
Jul 31, 2016 | Posted by admin in ONCOLOGY | Comments Off on The Most Common Benign Lesions and Their Borderline and Malignant Counterparts
Premium Wordpress Themes by UFO Themes
WordPress theme by UFO themes