A previously unknown severe respiratory illness appeared toward the end of 2002. Before being brought under control the following spring, more than 8,000 cases and 774 deaths had occurred in 29 countries. It reemerged in December 2003 and January 2004, causing four cases of mild disease in humans. This disease, designated severe acute respiratory syndrome (SARS), is caused by a newly discovered coronavirus, SARS-CoV, which is able to infect cells of the lower respiratory tract and cause an atypical pneumonia. It differs from other coronaviruses, which infect the upper respiratory tract, causing the common cold, by being able to survive at human body temperature.

SARS appears to have entered the human population following the mutation of a closely related animal virus of palm civets and other animals found in live-game markets in Asia. The mutated virus has an enhanced ability to bind to human ACE-2, its cellular receptor. Transmission of human SARS-CoV readily occurs between people through inhalation or mucosal exposure to infectious respiratory droplets or by contact with contaminated surfaces. The major outbreak in 2002–2003 was contained by a combination of strategies including quarantine, travel notices, surveillance of travelers, and institution of public and private hygienic measures.

The immune system appears to have both pathogenic and protective roles in SARS. Much of the lung injury results from inflammatory responses by Th1 cells and macrophages brought into the affected area. Immunosuppressive corticosteroids were therefore used to treat the disease. Other components of the immune response are beneficial, especially neutralizing antibodies. A number of vaccines using viral components are being developed to stimulate their production. These efforts should proceed with caution due to concerns that the antibodies induced may actually enhance infection.

Control of the Outbreak

Given the ease of transmission between humans and the severity of the disease, a massive collaborative effort was quickly undertaken to identify the causative agent, map its genome, determine the route of transmission to and between people, develop means of diagnosis, and monitor and reduce disease spread, with the result that the outbreak was contained within six months of its emergence in humans.

Starting in late 2002, a new and deadly respiratory illness struck several locations in Asia and Canada as well as other countries throughout the world. Unlike past outbreaks of avian influenza in humans, this disease was easily transmitted from person to person by causal contact, similar to the common cold but much more serious. By the end of this outbreak in early 2003, there had been 8,096 reported cases of human infection with 774 deaths (9.6% fatality rate). An intensive research effort rapidly determined that the organism responsible for this outbreak was a coldlike virus, raising public and professional fears of a possible pandemic with a highly pathogenic, readily transmissible microbe. Unlike many respiratory diseases, including the common cold and influenza, relatively few children became infected, and those who did developed less severe disease manifestations. Individuals over the age of 65 years were at significantly higher risk of developing serious or fatal illness.

Massive efforts by biomedical researchers and the international health community led to the rapid accumulation of relevant information about the disease agent and its transmission, allowing the outbreak to be swiftly brought under control using both traditional and novel surveillance and protection strategies. The successes in dealing with this crisis may aid in the control of future epidemics or pandemics that pose serious health threats.

Severe acute respiratory syndrome (SARS) was first recognized in the Guangdong province of China in November 2002, although serological evidence from stored blood components later indicated that 1.8% of healthy members of the Hong Kong population had developed antibodies to the animal form of the virus by 2001. This treatment-resistant emerging infection spread rapidly to seven other Chinese provinces, including a large outbreak of atypical pneumonia in the provincial capital of Guangzhou. Many of the afflicted persons were health care workers. The disease was then disseminated by a physician traveling to Hong Kong who infected 16 guests staying on the same floor of his hotel (Hotel M). These people spread the disease elsewhere. SARS had become a global health threat by spring 2003, with clusters occurring in China, Hong Kong, Vietnam, Singapore, and parts of Canada, including Toronto. It ultimately affected 29 countries on five continents; only eight cases were confirmed in the United States, and these did not originate there but were imported by travelers from affected areas. On March 12, the World Health Organization issued a global health alert. The next month, due to fears of an outbreak with endogenous transmission in the United States, SARS was added to the U.S. list of quarantinable communicable diseases. This required a presidential order and an amendment to the CDC quarantine regulations. Diseases in this group include cholera, diphtheria, infectious tuberculosis, plague, smallpox, yellow fever, and viral hemorrhagic diseases. The CDC prevents introduction of disease into the United States from foreign countries by requiring the reporting of ill passengers on incoming vessels and airplanes and restricting imports with the potential to transmit disease to humans. The Food and Drug Administration then regulates interstate quarantine regulations. By the use of travel advisories, screening of international travelers, and quarantine of contacts of infected persons, the world public health community was able to contain SARS infections worldwide by July 2003. In September and December 2003 and February 2004, laboratory-acquired infections occurred in Singapore, Taiwan, and China, respectively. Community spread resulted during the last instance. Four mild cases occurred during a SARS reemergence in China in December 2003 and January 2004; two of these appear to have arisen through contact with live infected palm civets at a restaurant in which all six of the animals there were found to be infected with an isolate genetically similar to that found in the humans. Fortunately, no further outbreaks have been detected since then; however, given the ease and rapidity of transmission and the high mortality rate, health care workers have remained vigilant against a reemergence.

This outbreak of disease, like many others throughout history, had an associated societal impact, leading to fear of several groups of people and discrimination against them or their communities. Due to its geographical distribution, the SARS epidemic led to fear of contact with Asians and people from Toronto, resulting in economic losses of tens of billions of dollars to those areas. Other similar instances include the shunning of residents of the Chinatown community of San Francisco in 1900 after an outbreak of bubonic plague struck the city, imported by rats carried by ship from Hong Kong. The hantavirus outbreak in the American West in 1993 led to stigmatization of Navahos, whose communities were the first and hardest hit. Leprosy, epilepsy, and mental illnesses raised fears that led to discrimination and avoidance of segments of the population, as more recently occurred with respect to the gay community and Haitians during the initial phase of the AIDS epidemic. 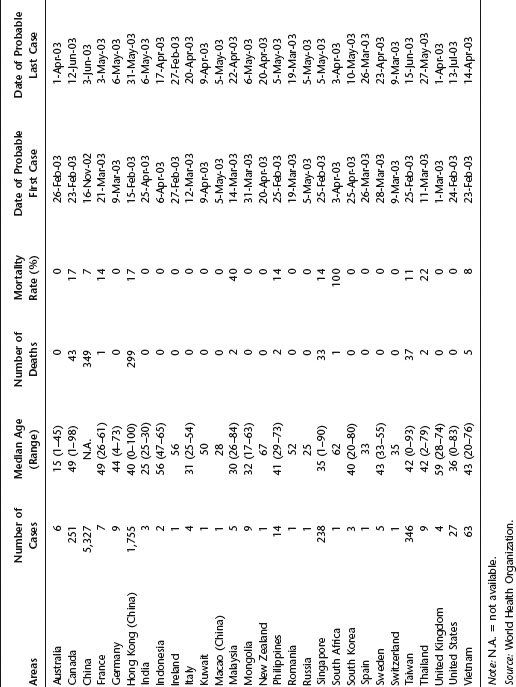 SARS often develops into a serious lower respiratory tract infection, progressing to atypical pneumonia. Its incubation period is typically four to six days but may last up to two weeks. Asymptomatic infections are uncommon. In its initial stages, SARS is characterized by fever, chills, headache, malaise, and rigor. Respiratory symptoms of cough, sore throat, and dyspnea commence two to seven days later. The cough is productive in 25% of patients. Gastrointestinal symptoms, including nausea, vomiting, and watery diarrhea, are present in a similar number of people. Central nervous system and liver involvement may also occur. Associated hematological findings are discussed later in this chapter. Tachypnea, tachycardia, and hypoxia occur in 40% to 75% of patients admitted to hospitals. About 20% to 30% of all patients require intensive care, and many need mechanical ventilation. Radiographical evidence of pneumonia involving one or both lungs has been found in all individuals with SARS to date. Pneumomediastinum may occur later in the course of the disease. In patients with fatal outcome, the terminal events included severe respiratory or multiorgan failure, sepsis, and acute myocardial infarction. For those who die in the initial ten days of infection, autopsy findings include diffuse alveolar damage, inflammatory infiltrates, edema, desquamation of lung cells, and hyaline membrane formation, while those who die later during infection have organizing diffuse alveolar damage, squamous metaplasia, and multinucleate giant cells. The major factor underlying lung pathology appears to be direct viral damage of type 1 and type 2 pneumocytes.

Alterations in differential blood counts occur during SARS. Although the total number of leukocytes remains normal, 70% to 95% of infected individuals become lymphopenic. Lymphoid tissue of the lymph nodes and white pulp of the spleen become necrotic and atrophy, with decreased numbers of CD4+ T helper cells and CD8+ T killer cells, natural killer cells, and dendritic cells. Platelet numbers may also be slightly reduced. Due to the major roles of lymphocytes in adaptive immunity, including antibody production, and platelets in clotting, infected persons may be more susceptible to infections and bleeding disorders. Other hematological abnormalities include increased levels of alanine aminotransferase, creatine kinase, and lactic dehydrogenase.

Several factors influence the course and transmission of the illness. One of these is viral burden. A short duration of illness (less than 21 days) correlates with having a viral load of less than 1 million copies per gram of lung tissue. Transmission usually occurs after the fifth day of infection as the viral load in the upper respiratory tract and feces gradually increases. Age is also a factor. Attack rates are highest in persons between the ages of 20 and 39 years, and only 1% of the infected were under the age of 10. Mortality rates are highest in individuals older than 65 years (52%) and decreased progressively in younger persons (45–64 years, 15%; 25–44 years, 6%; 0–24 years, 0%). The presence of comorbidities, extensive lung involvement, neutrophilia (high neutrophil count) at presentation, increased levels of lactic dehydrogenase, hyperuricemia, acute renal failure, and pregnancy are associated with a poor prognosis.

FIGURE 21.1 Damage to the alveoli of the lungs caused by SARS

Pregnant women are particularly vulnerable to SARS. Infection with SARS-CoV increases the incidence of spontaneous abortion, premature birth, and need for emergency cesarean section. The development of disease during the second or third trimester of pregnancy is more likely to result in renal failure, secondary bacterial pneumonia, sepsis, adult respiratory distress syndrome, disseminated intravascular coagulation, and death than is the case for women who are not pregnant.

Intensive research rapidly determined that the disease epidemic resulted from infection with a new group 2b coronavirus, the SARS-associated coronavirus (SARS-CoV), identified in March 2003 and found in the lungs of all patients with fatal disease. Mapping of the viral genome was completed on April 12 of that year. Other animals, including bats, macaques, ferrets, domestic and wild cats, pigs, and chickens, may be infected with SARS-CoV. Unlike the typical pattern for most epidemic-inducing agents, this virus is not amplified by passage through pigs or chickens after intravenous, intranasal, ocular, or oral inoculation, although it is detectable in their blood by polymerase chain reaction (PCR) or antibody detection.