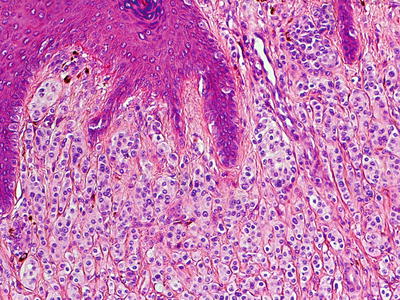 A transitional area, where conventional melanocytes in the superficial dermis transition into the ballooning melanocytes: H&E, 100× magnification 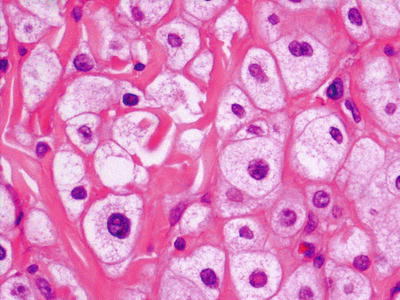 In contrast to the typical appearance resembling an intradermal nevus in white skin, reports in Asian skin types however indicate that the appearance of a balloon cell nevus tends to be polypoid or pedunculated and more resembling a soft fibroma or papilloma [8].

Balloon cells are characterized by their comparatively large sizes, centrally placed small round nuclei and relatively clear cytoplasm. When transitional nevus cells are evident at the periphery, one can see both balloon cells and nevus cells giving a ‘ground glass’ appearance [9]. The cytological features of a balloon cell melanoma are similar with the added presence of nuclear pleomorphism, atypia, mitoses and the absence of intervening stroma [10].

Ultramicroscopic examination is especially important in the case of balloon cell nevi. Balloon cells are formed by progressive vacuolization of melanocytes or nevus cells brought about by the enlargement and eventual destruction of melanosomes [11].
Balloooning is essentially large vacuole formation by coalescence of small vacuoles that originate as abnormal melanosomes. Melanosomes in a balloon cell nevus tend to merge and the majority degenerate leaving large cavities. Only a minority still exhibit giant melanosomes. Interestingly, most of these abnormally large melanosomes are not melanized. Melanosomes of intradermal nevus cells are, in contrast, very small and fully melanized [12].
The initial stages of ballooning shows a large number of melanosomes, a well-developed endoplasmic reticulum and frequent mitoses – all pointing to a proliferative rather than a degenerative process. However, such proliferation seems to be a self-regulatory process – where unlimited production of melanosomes continues without accompanying melanization until degeneration of the melanosome i.e., the so called ‘ballooning’ process. In contrast, human embryonic hair follicles tend to employ phagocytosis as a self-destructive mechanism [13].
The electron microscopic images (Figs. 10.4 and 10.5) show a melanosome and the process of ‘ballooning’ degeneration quite clearly. 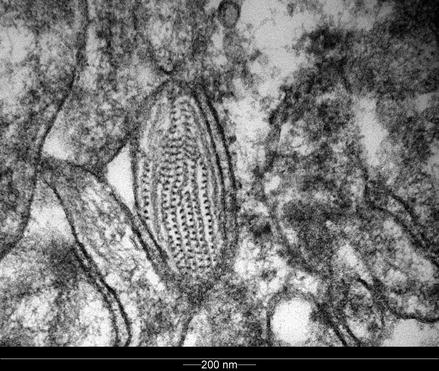 Normal melanosomes in some of the melanocytes: electron microscopy 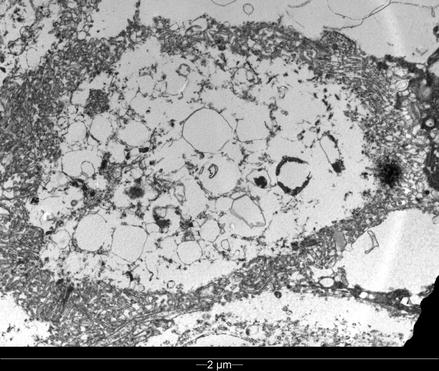 Abnormal, disintegrating melanosomes in the balloon cells: electron microscopy
Case 2
A 66-year-old man presented to a primary care skin cancer clinic in Melbourne, Australia requesting a routine skin check. He was not concerned about any particular lesion. There was no personal or family history of melanoma or non-melanoma skin cancers. He had worked outdoors in construction and as a firefighter for over 20 years. He had never used sun beds or used welding equipment. He gave no significant history of recreational sun exposure.
On examination the patient had Fitzpatrick skin type 2 with significant actinic damage to the face, forearms and dorsum of the hands, with multiple solar lentigines and scattered small actinic keratoses on the temples. A whole body skin examination was undertaken with the aid of a Heine Delta 20 non- polarizing dermatoscope. (Heine Optotechnik, Herrshing, Germany). Digital clinical and dermatoscopic images were taken with a Medicam 800 Fotofinder camera with non-polarizing lens (Fotofinder Systems GmbH, Aichner, Birnbach, Germany), the dermatoscopy images being at 20× magnification. A lesion of concern was found on the right posterior upper arm. It measured 8 mm in diameter and was slightly domed, being raised 2–3 mm from the skin surface and resembled a seborrheic keratosis (Fig. 10.6). Dermatoscopically it was pigmented, and structureless with two colours, blue-grey centrally and brown peripherally, almost symmetrically combined, as well as white reticular lines (inverse or negative network). There was a polymorphous pattern of vessels both linear and and dots (Fig. 10.7). The lesion was quite different dermatoscopically to all the patient’s other pigmented skin lesions (‘ugly duckling sign’) even if appeared a possible seborrheic keratosis clinically. The decision was made to undertake an excisional biopsy on suspicion of melanoma. 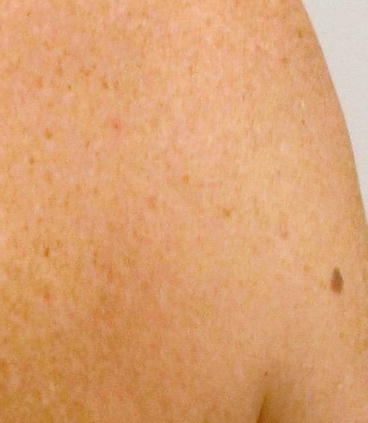 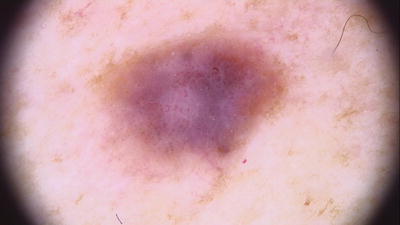 Sections showed a broad, asymmetric nested and single-cell proliferation of severely atypical melanocytes along the dermoepidermal junction, with extension into, and filling the dermis. The junctional component exhibited prominent Pagetoid upward scatter. The dermal component lacked maturation on descent, and extended to a depth of 0.95 mm (Clark level 4). The cells contained hyperchromatic pleomorphic nuclei, and a swollen, ballooned appearance, with abundant pale granular and/or vacuolated cytoplasm. Virtually all of the cells within the tumor exhibited this appearance, including the epidermal component. There was moderate mitotic activity with 3 mitotic figures seen per mm sq. No ulceration, lympohovascular invasion, perineural invasion, satellitosis, or regression was noted. Excision was complete.
Only gold members can continue reading. Log In or Register to continue

Tags: Clinical Cases in Skin Cancer Surgery and Treatment
Nov 17, 2016 | Posted by admin in ONCOLOGY | Comments Off on Balloon Cell Nevi and Balloon Cell Melanomas: What Are They?
Premium Wordpress Themes by UFO Themes
WordPress theme by UFO themes