The pathogenesis of illness due to the rickettsiae is vasculitis. The rickettsiae proliferate in the endothelial lining cells of the small arteries, capillaries, and veins. In Q fever the organisms are inhaled and proliferate in the lungs, causing inflammation and bacteremic seeding of other organs, particularly the liver. All of the important rickettsial infections are vector-borne, whereas Q fever usually results from inhalation of dust contaminated by the birth fluids of domestic ungulates.

In any discussion of the treatment of rickettsioses it is important to stress that proper treatment cannot be given unless the diagnosis is suspected. Confirmation of the diagnosis is usually serologic and almost always delayed, because antibodies occur no earlier than the second week of illness in any of the rickettsioses. The arthropod-borne rickettsioses are diseases of the spring and summer in temperate climates. Q fever can occur at any season if exposure to aerosols of the organism occurs. Given an appropriate geographic, temporal, and/or occupational history, the triad of fever, headache, and rash should cause the physician to suspect a disease caused by the rickettsiae. As early treatment is important in preventing fatalities, particularly in Rocky Mountain spotted fever (RMSF), therapy should be instituted when the diagnosis is suspected.

RMSF was first described in the late 1800s in the Bitterroot Valley of Montana. Although originally recognized in the western United States, it now has a higher documented prevalence in the South Atlantic states and in the south-central region. The causative agent is Rickettsia rickettsii, a member of the spotted fever group of rickettsial infections.

Rickettsia rickettsii is transmitted to humans by the bite of an infected tick. Ticks are both the vectors and the main reservoirs of this agent; the specific tick responsible for transmission varies from region to region: In the eastern United States, the dog tick, Dermacentor variabilis, is the usual vector, whereas in the western United States it is the wood tick, Dermacentor andersoni. The adult tick transmits the disease to humans during feeding, releasing R. rickettsii from the salivary glands after feeding for 6 to 10 hours. Humans can also be infected by exposure to infected tick hemolymph, which may occur during the removal of ticks from persons or domestic animals, especially when the tick is crushed between the fingers. Although the incidence of RMSF has increased from less than two per million in 2000 to over eight cases per million persons in 2008, case-fatality rate has declined to 0.5%.

The incubation of RMSF ranges from 2 to 14 days, with a median of 7 days. Virtually all patients have fever, usually above 38.9°C (102°F). The major diagnostic sign is the rash, seen in approximately 90% of the patients, which usually occurs within 3 to 5 days after the onset of fever. Fewer than half of the patients show the rash during the first 3 days of the illness. The rash typically starts around the wrists and ankles, but it may start on the trunk or be diffuse at onset. Although involvement of the palms is considered characteristic, this does not occur in all patients and often occurs late in the course of the disease (Figure 170.1). Other common symptoms include severe headache, myalgias, and gastrointestinal complaints such as nausea, vomiting, and severe abdominal pain. 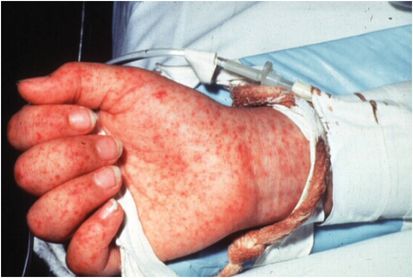 Complications of RMSF include meningismus, meningitis, renal failure, pulmonary involvement, hepatic dysfunction with development of jaundice, splenomegaly, myocarditis, and thrombocytopenia. Although in the early reports the case-fatality rate was greater than 20% in the absence of early therapy, in recent series of patients death occurs in 4% to 8% of the cases. In those with fulminant RMSF, death occurs 8 to 15 days after the onset of symptoms.

Diagnosis of RMSF is primarily based on a high clinical suspicion in the setting of a patient with fever, headache, and myalgias with exposure to ticks. Rash is found in only 14% of patients on the first day of illness and in 49% of patients during the first 3 days. A skin biopsy of a rash lesion (when present) can show R. rickettsii with immunohistochemistry staining or nucleic acid amplification test. This has a specificity of 100% and a sensitivity of 70% but is useful only in patients who have developed a rash. Serologic diagnosis is retrospective. The use of the polymerase chain reaction is not well established for the diagnosis of RMSF.