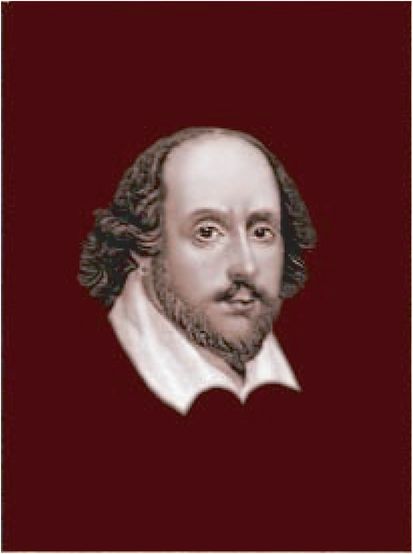 It seems ironic, therefore, that these concepts reflect that this collection of immune cells in the left upper quadrant of the abdomen appeared to function as a way of cleansing the body. Indeed, Shakespeare’s “unhappy spleen,” one that has been removed from residence (by splenectomy) or whose function is embarrassed by one or another disease (hyposplenism), predisposes (by not appropriately performing its cleansing function) its former owner to an infectious disease process with substantial morbidity and mortality by becoming ohnemilz.

This disease, overwhelming postsplenectomy infection (OPSI), also referred to as postsplenectomy sepsis (PSS), is one of a group of infectious disease processes, such as bacterial meningitis and meningococcemia, for which diagnosis and therapeutic intervention are required immediately to minimize the disease impact. Using Ben Franklin’s (Figure 97.3) “ounce of prevention is worth a pound of cure” concept, prevention as well as therapeutic intervention is an important part of any discussion of OPSI. 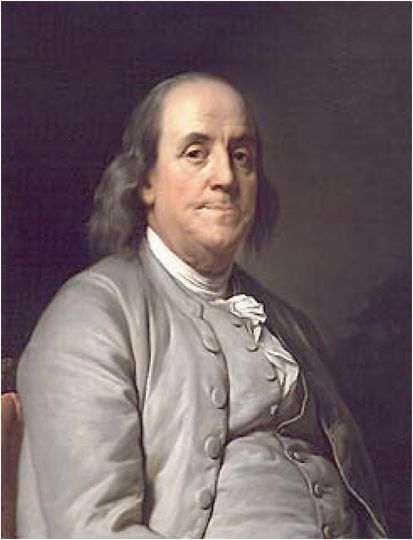 Risks and timing of OPSI

The individual risk of OPSI is dependent on the cause of splenectomy as well as the time after the procedure. Overall, the lifetime risk of 1% to 2% is estimated related to trauma or idiopathic thrombocytopenic purpura (ITP), 3% for spherocytosis, 6% for Hodgkin’s disease and portal hypertension, and as high as 11% for thalassemia. Although some asplenic conditions clearly have a lower risk of OPSI, if OPSI develops the morbidity and mortality are not lower in these cohorts. About 5% to 6% of total OPSI cases occur in individuals with poorly functioning spleens. A partial list of diseases associated with hyposplenism can be found in Table 97.1.


No ideal assay is available to measure adequate splenic function. The presence of Howell–Jolly bodies (nuclear remnants in circulating red blood cells [RBCs]) is too insensitive. Quantification of red cells containing “pocks” (actually vacuoles containing hemoglobin found in older RBCs) as seen by interference microscopy, however, appears to be a valuable tool.

About 50% of cases of OPSI following a splenectomy occur within 2 years of the event and about 75% within 5 years. It is important to know, however, that 2% to 3% of cases occur 20 years or longer after the event and there have been reports of OPSI four decades after the onset of ohnemilz.

The classical presentation of OPSI is one that often begins with an alert, relatively nontoxic patient who might walk into an emergency department complaining of fever and chills associated with myalgias and diarrhea. The individual deteriorates quickly, developing lactic acidosis due to organ hypoperfusion, disseminated intravascular coagulation (DIC), and multiorgan failure. This gastroenteritis-like presentation can, but should not, divert attention away from OPSI in the at-risk individual.

The progression to septic shock and death in these individuals can happen within hours of initial presentation. Overall mortality rates are 50% to 60%, with a majority of the deaths within 24 hours. Encouragingly, relatively recent pediatric data suggest that increased survival rates can result from prompt recognition and overall incidence can decrease with preventative measures. Purpura fulminans (Figure 97.4) has been associated with OPSI as well as with meningococcemia. It causes considerable endothelial injury, resulting in arterial thrombosis and gangrene of one or multiple extremities. If the affected individual survives, multiple extremity amputations can result. 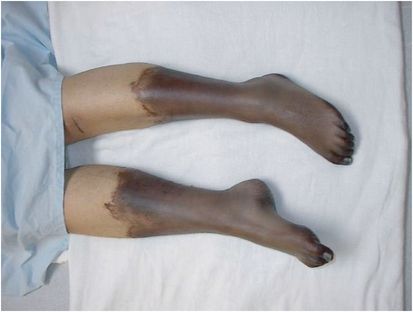 Prompt diagnosis requires knowledge of the issue with spleen function or absence in an appropriately ill patient. Confirmation especially awaits finding positive blood cultures for the bacterial etiology. Blood cultures are often positive within 6 to 8 hours due to the high initial bacteremia, which is as much as 10 000 times the organism load of a more routine bacteremia. Because of this massive bacteremia, organisms can be found in the buffy coat of the peripheral blood and sometimes on a standard peripheral smear. It should be noted that Wright stain, routinely used on peripheral blood smears, will stain all bacteria blue, even the usual “red” organisms on Gram stain of gram-negative bacteria.

The pneumococcus is without question the most canonical cause of OPSI. This α-hemolytic, polysaccharide-encapsulated, gram-positive diplococcal bacterium has a distinctive morphology on staining, a so-called lancet shape (Figure 97.5). Its capsule is a well-recognized virulence factor, interfering with phagocytosis by preventing effective C3b opsonization of the bacterial cells. Overall, S. pneumoniae is involved in 50% to 90% of OPSI cases, with the percentage of pneumococcal OPSI cases tending to increase with age. In series that include single case reports, pneumococci are often underrepresented because many case reports relate to less common causes of infection in asplenic hosts. 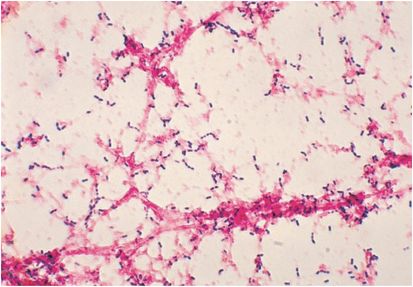 No single type or group of the 90 different capsular types appears to be more associated with OPSI than other forms of invasive pneumococcal disease. With the use of pneumococcal polysaccharide vaccination, however, especially in places with universal immunization using the newer 13-valent conjugated product, a shift of serotypes can occur.

It is important to note that antimicrobial drug resistance has become increasingly prevalent. Some isolates are only less sensitive to penicillin (particularly relevant in bacterial meningitis), some are fully resistant to penicillin, and some may be resistant to penicillin as well as the extended-spectrum cephalosporins such as ceftriaxone. The local epidemiology of pneumococcal resistance must be considered in the empiric treatment of OPSI. High levels of penicillin resistance are reported in Spain, parts of eastern Europe, and South Africa (Figure 97.6). In the United States, resistance is more prevalent in Alaska and the South but can be found anywhere. It is yet to be determined whether changes in serotypes in the post-conjugate vaccine era will in the long run increase or decrease antimicrobial resistance. 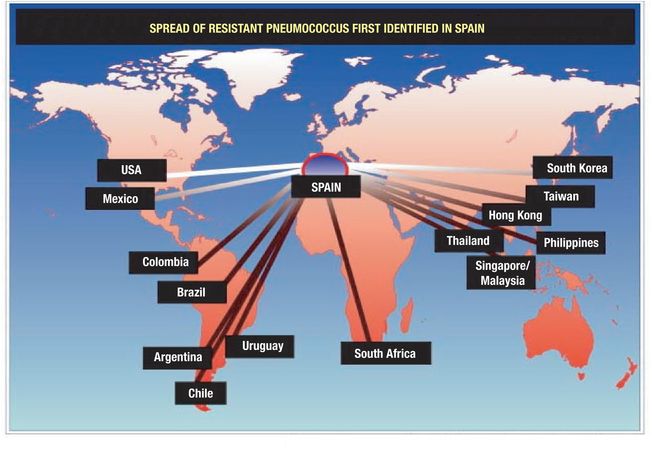 Although studies report the frequency of Haemophilus influenzae type b (Hib)-associated OPSI to be about 10 times lower than that of the pneumococcus, Hib is classically the second most common cause of OPSI. It has primarily affected children younger than 15 years. Haemophilus influenzae is a small polysaccharide-encapsulated pleomorphic gram-negative coccobacillus (Figure 97.7) that can be confused with pneumococcus if the Gram stain technique is poor (over- or underdecolorized). Like pneumococcus, the type b capsule is a major virulence factor for invasive disease. 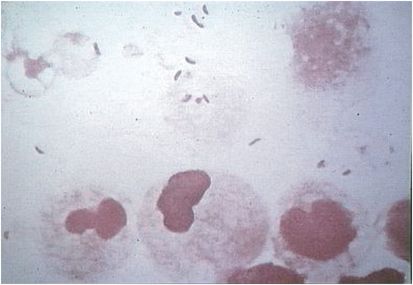 The incidence of invasive Hib disease (and correspondingly of Hib-related OPSI) has dramatically decreased because of the use of the conjugated Hib vaccine. Neither nontypeable strains nor non-b capsular organisms have been found to be significant causes of OPSI, although nontypeable organisms may cause usually noninvasive infection in the human respiratory tract. When choosing antimicrobial therapy, it is important to know that many H. influenzae strains produce β-lactamases.