Figure 15.2 Hypopyon (layering of white blood cells in the anterior chamber) in an eye with acute-onset post-cataract surgery endophthalmitis.

In the Endophthalmitis Vitrectomy Study (EVS), the coagulase-negative staphylococci were the most commonly cultured organisms (68%) among patients with confirmed growth. Other gram-positive organisms were cultured in 22% of patients and included Streptococcus and Staphylococcus aureus. Gram-negative organisms were isolated in 6% of the cases in the EVS and more than one species was confirmed in 4% of the cases. Fortunately, the coagulase-negative staphylococci are one of the least virulent causes of acute-onset postoperative endophthalmitis. S. aureus, Streptococcus species, and the gram-negative organisms usually produce a more rapidly progressive and fulminant inflammation often leading to severe visual loss.

Another subgroup of post-cataract surgery endophthalmitis is the delayed-onset category (Figure 15.3). These patients present 6 weeks or more after cataract surgery with a slowly progressive, often milder, inflammatory response. The inflammation can be isolated to the anterior segment or involve both the anterior segment and vitreous. The intraocular inflammation may respond initially to topical steroid therapy but usually recurs as the topical steroids are tapered. A common cause of delayed-onset postoperative endophthalmitis is Propionibacterium acnes. This is a ubiquitous, gram-positive, non-spore-forming pleomorphic bacillus. Clinical features of intraocular infections caused by this organism include granulomatous inflammation with large keratitic precipitates (clumps of inflammatory cells) on the corneal endothelium. A characteristic diagnostic feature is the presence of white intracapsular plaque, which has been shown to be composed of organisms mixed with residual lens cortex (Figure 15.4). Because P. acnes is a slow-growing anaerobic organism, it is important for the microbiology laboratory to be instructed to keep these anaerobic cultures for at least 2 weeks. Other organisms responsible for delayed-onset postoperative endophthalmitis include Candida, Staphylococcus epidermidis, and Corynebacterium species. 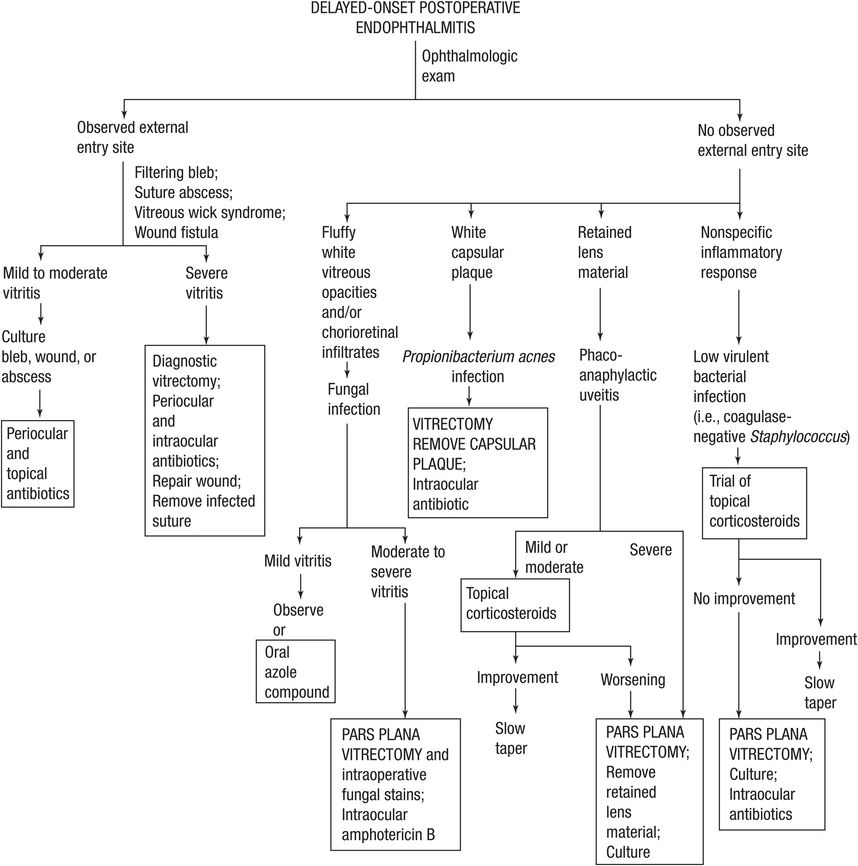 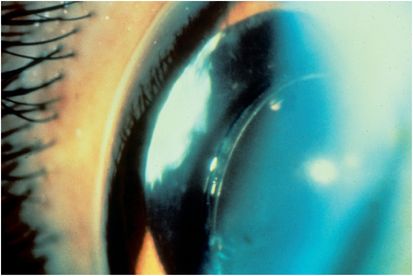 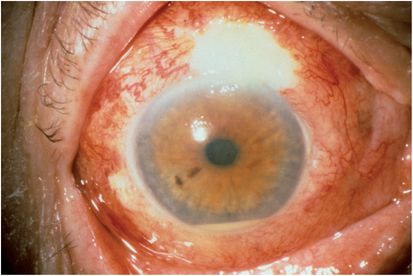 Endophthalmitis after open-globe trauma should be suspected whenever a greater than expected inflammatory response is observed. Because the organisms (e.g., Bacillus species and Streptococcus species) causing open globe-related endophthalmitis are, in general, more virulent than organisms causing postoperative endophthalmitis, the final visual outcome is often poor. The associated trauma to the eye and the frequent delay in diagnosis also contribute to a poor visual prognosis. A high index of suspicion and early diagnosis are important, because even traumatized eyes infected with virulent organisms can sometimes be salvaged when treatment is promptly initiated. Prophylactic antibiotic treatment from high-risk injuries (rural setting, injuries involving vegetable matter or soil, contaminated eating utensils, retained foreign bodies) should be administered. The management of open globe-related endophthalmitis is similar to other endophthalmitis categories and often includes vitrectomy and intravitreal, subconjunctival, and topical antibiotics and steroids.

Endogenous endophthalmitis results from hematogenous spread of organisms to the eye (Table 15.1). Fungi are a more common cause than bacteria and Candida albicans is the most common fungus isolated. The classic ocular finding is white vitreous opacities attached to each other by inflammatory vitreous bands in a configuration termed “string of pearls” (Figure 15.6). The second most frequently encountered fungus is Aspergillus species. Streptococcus species, S. aureus, and Bacillus species are the most common cause of endogenous bacterial endophthalmitis. These patients are frequently debilitated or immunocompromised with indwelling catheters, although endogenous endophthalmitis can occur in drug abusers and rarely in otherwise healthy patients after dental procedures or childbirth. The infection may be caused by a transient bacteremia or fungemia in which case blood cultures may be negative. Sepsis with deep organ involvement may also be present. When the source of infection is not apparent, a systemic workup is indicated. 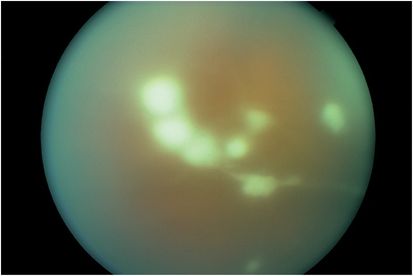 Figure 15.6 White inflammatory vitreous opacities in a “string of pearls” configuration in a patient with endogenous Candida endophthalmitis.

Endophthalmitis can occur from direct spread of organisms into the eye from an infected corneal ulcer (Figure 15.7). Factors predisposing to the development of endophthalmitis associated with microbial keratitis include corticosteroid use, systemic immune dysfunction, as well as local ocular factors such as prolonged wear of contact lenses or contaminated lens solutions. Visual outcomes are poor due to the unusual and virulent nature of the infecting organisms.