Figure 179.1 Primary pulmonary coccidioidomycosis. This 18-year-old male Pacific Islander presented with community-acquired pneumonia, and this chest radiograph shows a dense right middle lobe infiltrate. Coccidioidomycosis was suspected as the patient had recently moved to California’s Central Valley to attend college, demonstrating the importance of the travel history in such settings. He was treated with fluconazole for 6 months and recovered uneventfully.

Because the presentation of acute coccidioidomycosis resembles that of many other respiratory infections, obtaining a travel history placing the patient in an endemic area in the weeks prior to onset of illness can greatly expedite the diagnosis and emphasizes the importance of a detailed exposure history for all such patients, not only for consideration of coccidioidomycosis but for other endemic mycoses or even more exotic infections. Although no findings are unique to acute coccidioidomycosis, those that tend to suggest this diagnosis include unexpectedly pronounced fever, fatigue, and weight loss and immune phenomena such as erythema nodosum. Eosinophilia may occur. Radiographic hints, when present, include a thin-walled cavity, nodule formation at sites of infiltrates, and pronounced hilar adenopathy, but these findings are nonspecific. Usually the clinical picture is indistinguishable from other causes of community-acquired pneumonia; patients are frequently prescribed one or more courses of antibacterial antibiotics and the absence of a response may be an important diagnostic clue. Some cases are serendipitously discovered when a routine sputum culture yields growth of the fungus.

The infection resolves spontaneously without treatment in the vast majority of patients. Some symptoms, particularly fatigue, may take weeks and in some cases, months to completely resolve. Persisting radiographic residua in the form of pulmonary nodules or cavities develop in approximately 5% of all infected individuals. Viable organisms may persist and remain inactive for decades after resolution of the primary infection. Reactivation may, however, occur, particularly in patients who subsequently become immunosuppressed.

The development of chronic active pulmonary infection or clinically important dissemination following primary infection is fortunately uncommon, occurring in just several percent of cases. Certain characteristics define individuals or groups with a greatly increased risk of dissemination or progressive pulmonary infection (Table 179.1) and in whom these complications tend to be more refractory to treatment. Included are those who are overtly immunocompromised due to underlying illness (e.g., human immunodeficiency virus/acquired immunodeficiency virus [HIV/AIDS], lymphoma) or due to receipt of immunosuppressants (e.g., patients who have undergone transplantation or are receiving treatment for rheumatologic disorders). Recently, several patients with disseminated coccidioidomycosis and abnormalities in their interferon (IFN)-γ–interleukin (IL)-23–IL-12 axis, as well as at least one patient with hyper-IgE syndrome have been described. For reasons that remain unexplained, Filipinos and African Americans are at increased risk of dissemination of their infection. Pregnant women (especially in the third trimester) and women in the immediate postpartum state often have great difficulty controlling their infections, although it has been suggested that flares of disease after delivery may represent a form of immune reconstitution inflammatory syndrome. It is not certain that transplacental infection of the fetus occurs and the very rarely observed neonatal infections are likely the result of aspiration of amniotic fluid or vaginal secretions. Diabetes mellitus, particularly if poorly controlled, has been associated with the development of chronic cavitary pulmonary disease and possibly also carries an increased risk of dissemination. It is also likely that exposure to very large inocula of arthroconidia may result in severe disease, including dissemination, even in previously healthy individuals without known risk factors.


Following primary infection, a small proportion of individuals go on to develop persistent infections confined to the lung. Such patients may display pulmonary cavities with walls that appear thicker than that seen in classical coccidioidal cavities (Figure 179.2) and chronic symptoms of dry or productive cough, chest pain, shortness of breath, and hemoptysis, each of which may wax and wane. A distinct subgroup will develop a destructive, progressive fibrocavitary pulmonary infection with fibrotic changes in the lung parenchyma and bronchiectasis. In addition to the symptoms mentioned earlier, these patients are often plagued by constitutional symptoms such as fever and weight loss, which may progress to cachexia. Complement-fixing antibody (CFA) titers in this group tend to be somewhat high. Complications associated with cavities include bacterial superinfection (recurrent), fungus ball formation (due to Coccidioides spp. or other fungi), and rupture into the pleura with (hydro-)pneumothorax, empyema, and/or bronchopleural fistula. In the absence of profound immunocompromise, chronic pulmonary disease is infrequently associated with extrapulmonary foci of infection. 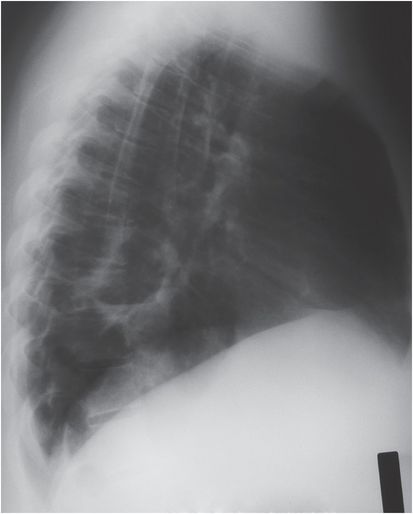 Figure 179.2 Chronic cavitary pulmonary coccidioidomycosis. Chest radiograph of a 21-year-old Hispanic woman with type II diabetes and known chronic cavitary coccidioidomycosis. She presented with 1 week of low-grade fever and increasing productive cough. Her lateral chest radiograph shows a chronic cavity with thickened walls and an air–fluid level consistent with bacterial superinfection. She responded to a 14-day course of amoxicillin–clavulanate and remained on fluconazole.

Disseminated disease usually becomes clinically evident within 6 months of the initial infection. Evaluation of the patient may reveal involvement of only a single anatomic site or of multiple organ systems. Dissemination may occur in patients who were asymptomatic with their primary infection and, in those with symptomatic primary infections it is common for pulmonary symptoms and findings on chest radiograph to have resolved completely at the time of presentation with extrathoracic disease. Both of these circumstances tend to obscure the diagnosis of coccidioidomycosis.

Skin lesions are the most frequently recognized manifestation of extrapulmonary dissemination. Lesions may be single or numerous, range in size from several millimeters to many centimeters in diameter, and, even in the same patient, may take on a variety of forms, including smooth to verrucous papules, plaques, ulcers, or pustules (Figure 179.3A). Bone is a frequent site of dissemination with vertebrae, often numerous, being particularly favored. The cranial vault, pelvis, ribs, tibia, feet, metacarpals, and metatarsals are other common targets. Bone lesions may be asymptomatic or associated with pain that may be described by the patient as constant and gnawing. These lesions are usually lytic, may be highly destructive, and may be accompanied by extensive adjacent soft-tissue involvement. Bone scans and magnetic resonance imaging (MRI) are particularly useful modalities for identifying bone lesions and for evaluating the extent of bone and neighboring soft-tissue involvement, respectively (Figure 179.4). Dissemination to joints is not infrequent and may be heralded by rapid or more insidious development of findings typical of septic arthritis. The knee is affected most frequently followed by joints of the ankle and foot, wrist, hands, and the elbow. The resultant synovial proliferation may be mistaken for rheumatoid arthritis by the arthroscopist. Pelvic joints may be involved, intervertebral disks are usually spared. Arthrocentesis may lead to the diagnosis; synovial biopsy, however, offers a higher yield. Subcutaneous abscesses may represent primary sites of dissemination but often prove to have resulted from suppuration of a lymph node or extension of pus from a deeper (sometimes surprisingly distant) focus by formation of a sinus tract.

Figure 179.3 Disseminated coccidioidomycosis, skin lesions. (A) This 26-year-old previously healthy Filipino man presented with coccidioidomycosis featuring numerous skin lesions of varying size and appearance. This photograph shows two suspicious lesions on the arm, each measuring ~5 mm in diameter. (B) Photomicrograph of a punch biopsy of the skin which was taken from the margin of the verrucous lesion shown in the adjacent photograph. There is significant lymphocytic infiltration, and numerous spherules are evident (several of which are highlighted by arrowheads) thus making the diagnosis of disseminated coccidioidomycosis. (Original magnification, 400×, tissue stained with hematoxylin and eosin.) This patient made a full recovery and continues on itraconazole. 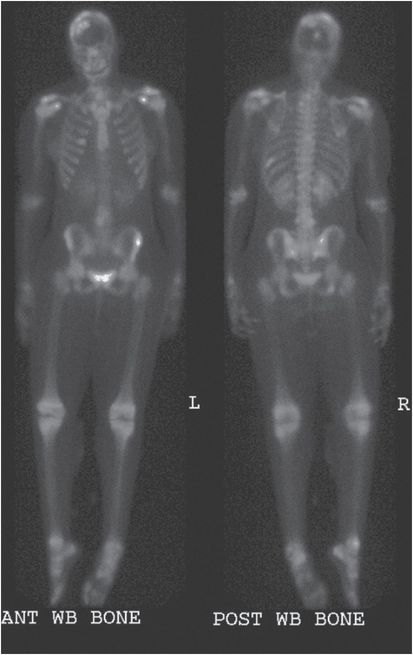 Figure 179.4 Disseminated coccidioidomycosis, bone lesions. This 14-year-old healthy African-American adolescent presented with widely disseminated coccidioidomycosis. These delayed whole-body three-phase bone scan images demonstrate abnormal uptake indicative of a multitude of bone lesions that were subsequently verified by magnetic resonance imaging, computed tomography, or plain film: vertebral lesions are seen throughout the length of the spine; there are multiple lesions of the calvaria; lesions affecting the right sixth rib, the left tenth rib, both shoulders, the right ankle, and the right ischium are readily appreciated. Of note, only her shoulder and lower spine lesions were symptomatic. She was successfully treated medically with 1 month of intravenous amphotericin B, which was transitioned to itraconazole. She continues on itraconazole.

The central nervous system is a major site of dissemination and infection at this site is most likely to result in permanent disability or death. Coccidioides spp. typically cause a chronic granulomatous meningitis, most often involving the basilar meninges of the brain and those of the upper spinal cord (Figure 179.5). Central nervous system involvement generally occurs within months of the primary infection but occasionally is seen after much longer intervals. Symptoms may be abrupt or insidious in onset and progress inexorably at a tempo that varies from patient to patient. If the underlying disease remains untreated it virtually always will lead to death within 2 years. Patients complain primarily of headache with anorexia, nausea, vomiting, visual changes, generalized weakness, and ataxia as possible associated symptoms (often being secondary to the development of hydrocephalus). Progressive lassitude and altered mentation often are the dominant findings. Furthermore, patients may have only very mild symptoms even in the face of impressive cerebrospinal fluid (CSF) findings and meningeal signs are often subtle or absent. Nonetheless, routine lumbar puncture is not indicated in the absence of potentially suspicious signs or symptoms. Hydrocephalus is a frequent complication of coccidioidal meningitis and may even develop late and in the face of appropriate, otherwise effective therapy. Abscess formation, cranial nerve involvement, myelitis, arachnoiditis, and syrinx formation, as well as cerebral vasculitis are also occasionally seen.

Figure 179.5 Coccidioidal
Only gold members can continue reading. Log In or Register to continue