The hallmark of COPD is the presence of airflow obstruction that is not fully reversible and which demonstrates little variability over time. It is usually progressive and there may be a range of pathological changes in the lung, including small airways disease and emphysema. The airflow obstruction in COPD is usually insidious in onset and progresses over a number of years or decades. As the airflow obstruction worsens, the risk of complications and exacerbations increases, impairing quality of life.

COPD is the fifth largest cause of disability in the world and is the fourth leading cause of death in the USA. A worldwide prevalence of 10.1% has been estimated, higher in Western countries which have older populations with greater lifetime exposure to tobacco.1 Despite this, it is known that COPD is underdiagnosed and misdiagnosed, especially in older adults. Based on smoking patterns it is likely that between half and two-thirds of patients with COPD are unknown to their health provider.2 Older adults may regard breathlessness as part of the ageing process and not seek medical attention. Comorbid conditions, social isolation, depression and a reduction in the perception of breathlessness may also have a role. Furthermore, there may also be a lack of diagnostic equipment such as spirometry in primary care, leading to mislabelling.

COPD is usually caused by cigarette smoking, although passive smoke exposure may also contribute. The Forced Expiratory Volume in 1 second (FEV1) declines by about 25–30 ml per year after the age of 25 years in healthy adults, but in susceptible smokers that decline exceeds 50 ml per year. COPD is associated with significant comorbidities.

The diagnosis of COPD relies on clinical judgement and the presence of airflow obstruction. The precise definition of airflow obstruction has been the subject of much academic discussion. International consensus guidelines [such as those of the Global Obstructive Lung Disease (GOLD) collaborative] support the diagnosis of airflow obstruction if, on spirometry, the FEV1/FVC (forced vital capacity) ratio is <0.7 post-bronchodilator. Incorporating the need to assess the patient after bronchodilation reduces the potential for misdiagnosing a reversible lung disease such as asthma. The UK National Institute of Health and Clinical Excellence (NICE) also advises that if the FEV1 is ≥80% of the predicted value, then the diagnosis should only be made in the presence of respiratory symptoms. This is because, as the lung ages, FVC begins to decline later than FEV1 and at a slower rate, which results in a natural fall in the FEV1/FVC ratio from about 75 to 70% by 70 years of age.3 Therefore, a definition which relies purely on the FEV1/FVC ratio will be less discriminatory in very old people, who may receive an inappropriate label.

A diagnosis of COPD should be entertained in patients with a risk factor (usually smoking) and one or more symptoms of exertional breathlessness, wheeze, chronic cough, chronic sputum production and ‘winter bronchitis’.4 In its early stages, symptoms may be intermittent or limited to a cough productive of clear or white sputum. Patients may also present with wheeze or a ‘chest infection’ which fails to improve as rapidly as expected. Most patients with COPD have a history of at least 20 pack-years of smoking (one pack-year being the number of cigarettes smoked per day, divided by 20, multiplied by the number of years smoking).

Clinical examination may reveal little in the early stages, although wheeze may be present. As the condition progresses over years and FEV1 falls further, lung hyperinflation occurs and hypoxia may develop, being common in those with an FEV1 <30%. More profound hypoxaemia (i.e. a PO2 <8 kPa) leads to pulmonary hypertension and right-sided heart failure, often manifest as peripheral oedema, a raised jugular venous pressure and sometimes secondary polycythaemia.

The differential diagnosis of COPD is wide and the most significant features are summarized in Table 50.1. In older adults, comorbidities are common. COPD is a major risk factor for cardiovascular events, independent of smoking.5 Heart failure is present in 20% of patients with COPD over 65 years of age.6 Bronchiectasis has also been found on high-resolution computed tomography (CT) scan in up to 29% of patients with confirmed COPD and chronic bronchitis in primary care7 and may manifest itself as a cause of frequent exacerbations. Osteoporosis is also more common in patients with COPD, partly due to the effects of corticosteroids.

Spirometry is considered possible in ∼85% of older adults, cognitive impairment being a major reason for inadequate results. Reversibility testing is not usually helpful, except where there may be doubt about a diagnosis of asthma (see later). A chest radiograph should be performed in all suspected new cases of COPD, mainly to exclude other conditions and to ensure that there is no evidence of lung cancer. If signs of cor pulmonale are present on examination, an ECG may show features of right-sided heart strain. Owing to the significant overlap with heart failure, echocardiography should be considered in those with relevant clinical features or a failure to respond to initial treatment. If doubt remains, more detailed tests of lung function can be undertaken, including transfer factor for carbon monoxide (TLCO) and a CT scan of the thorax if symptoms seem disproportionate to the level of lung function or if abnormalities are seen on the chest radiograph.

There is a relatively poor association between lung function and health status. Nevertheless, the condition is still generally categorized into different levels of severity according to percent predicted FEV1 (Table 50.2). Other important aspects to consider in the assessment of an older person with COPD are as follows:

Stopping smoking has been shown to reduce significantly the age-related decline in FEV1. It is vital that patients who continue to smoke are encouraged to stop and are supported throughout this process, with the help of appropriate therapies such as nicotine replacement therapy, bupropion or varenicline. Quit rates are as good if not better in older adults than in their younger counterparts. Pneumococcal and annual influenza vaccination should be offered to all patients.

COPD should be managed by a multidisciplinary team, many aspects of which are incorporated into pulmonary rehabilitation programme. Patients with more severe airflow obstruction may be considered for enrolment in a chronic disease management programme, with support at home by specialist nurses. The use of patient self-management plans is vital, including advice about recognizing and treating exacerbations. As the condition progresses, there should also be the opportunity to discuss advance planning and end-of-life care wishes.

Treatment is targeted at reducing breathlessness and limiting the sequelae of COPD, by impacting positively on health status and exacerbation rates. Over the past few years, it has been appreciated that preventing an exacerbation is of particular importance, due to its impact on lung function, health status and mortality. The GOLD guidelines suggest that frequent exacerbations should be considered present if there is one or more per year for the past 3 years, whereas NICE suggest two in the previous 12 months, and this should guide treatment decisions. Treatment options may seem complex but are simpler when displayed as an algorithm (Figure 50.1). 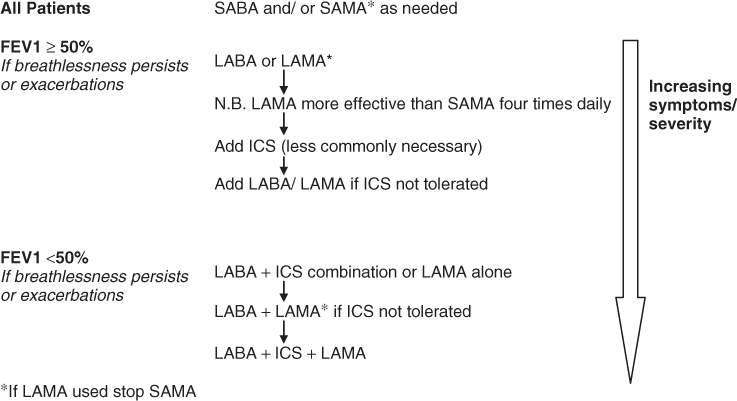 Breathlessness and wheeze are initially treated using a short-acting inhaled bronchodilator as required (either a β2-agonist, e.g. salbutamol, and/or an antimuscarinic, e.g. ipratropium bromide). If patients with stage 2 disease (FEV1  ≥ 50%) are still symptomatic or exacerbate frequently despite this, guidelines advise the regular use of a long-acting β2-agonist (LABA) (e.g. salmeterol or formoterol) or a long-acting muscarinic antagonist (LAMA) (e.g. tiotropium). The latter is certainly more effective than regular ipratropium bromide. There is strong evidence that LABAs and LAMAs have a positive impact on symptoms, health status and exacerbation rates. Furthermore, tiotropium has been associated with a small reduction in all-cause mortality.8

In stage 3 disease (FEV1 <50%), where a patient remains breathless or where there are repeated exacerbations, despite a LABA, then there are two main options. First, an inhaled corticosteroid (e.g. beclomethasone, budesonide, fluticasone) could be added to the LABA in a combination inhaler (e.g. Seretide, Symbicort). A Cochrane review has shown that this combination reduces exacerbations by 9% and mortality by about 20% compared with steroids alone in stable COPD.9 Unfortunately, clinical trials have shown a small but significant increase in the risk of non-fatal pneumonia in patients receiving inhaled corticosteroids, but this does not outweigh the benefits of their use.10 Second, a LAMA (currently tiotropium) may be added to an existing LABA.

In patients who remain breathless or who exacerbate frequently, regardless of FEV1, a LAMA could be added in addition to an inhaled LABA–corticosteroid combination or vice versa.

It is important to determine whether new treatments improve symptoms, exercise tolerance and ability to perform ADLs, rather than simply alter lung function, which is less relevant. If treatments are used primarily to minimize exacerbations, then they should be continued in a preventive capacity, whereas those given for symptom improvement could be discontinued if ineffective after a month’s trial.

If symptoms persist or for patients unable to use inhalers correctly, a theophylline may be considered; slow-release preparations are preferred. Doses should generally be kept low in older people to avoid gastrointestinal side effects and the risk of drug interactions, particularly antibiotics during exacerbations. In addition, a trial of mucolytic therapy can be considered if sputum viscosity is increased. Nebulized bronchodilators may be of help for those patients with very advanced disease (who could be offered a symptomatic trial) or where the inhaler technique is so poor that no other relief is possible. In a few patients with advanced COPD, maintenance oral corticosteroids may be considered, but in general the risks outweigh the benefits.