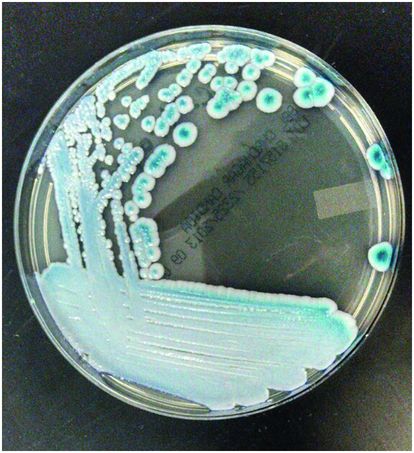 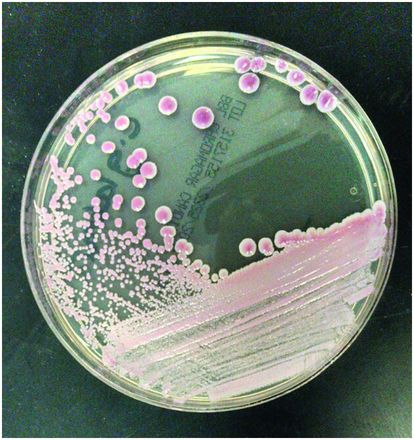 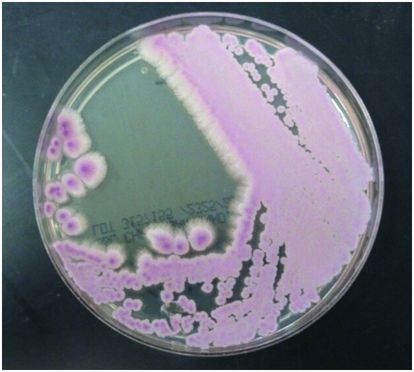 Diagnosis of Candida infections continues to be primarily via culture, although a number of faster and more sensitive contemporary diagnostic methods have become available, including polymerase chain reaction (PCR), CHROMagar (Figure 172.5), and fluorescent in situ hybridization (FISH). Indirect diagnostic methods have also become more widely used in clinical practice, such as the serum or plasma (1→3)-β-D-glucan (BDG) assay, which is specific for a unique component of the cell wall in many fungi that is detectable during invasive candidiasis. Given that several Candida species have intrinsic or acquired resistance to antifungal agents (Table 172.1), these tests may prove to be cost-effective approaches for guiding early appropriate antifungal therapy in certain clinical settings. Newer antifungal agents have become available for the treatment of Candida infections, including advanced-generation triazoles and the echinocandins (Table 172.2), which are particularly useful when antifungal resistance is suspected or proven. 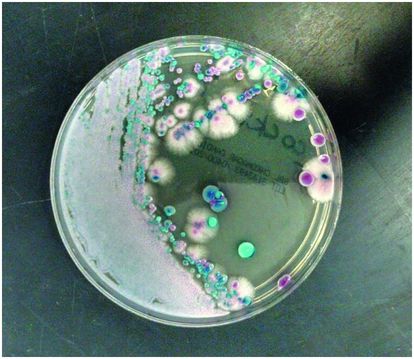 Primary cutaneous candidiasis is commonly seen in normal hosts manifesting as diaper dermatitis and intertriginous infections. Other manifestations include balanitis, folliculitis, paronychia, and onychomycosis. Cutaneous candidiasis most commonly presents in skin areas that are moist and/or occluded, or in areas of impaired skin integrity, such as burns or chronic wounds. Immunocompromised patients, including patients with diabetes mellitus, are also at increased risk. Cutaneous candidiasis is generally a clinical diagnosis, demonstrated by the presence of a confluent erythematous rash with satellite lesions in a typical warm, moist environment such as the perineum or axilla. Microscopic examination of skin scrapings revealing budding yeast cells and hyphae may be useful to confirm the diagnosis. Positive cultures for Candida species may also assist with diagnosis; however, positive results may occur because of colonization or contamination, and thus culture is generally not recommended. Bacterial superinfection may also coexist with cutaneous candidiasis, and sometimes necessitates antimicrobial therapy. Nonantimicrobial methods are important in both prevention and treatment of cutaneous candidiasis, such as keeping skin surfaces clean and dry, frequent diaper changes, and control of hyperglycemia in diabetics. Topical antifungals such as nystatin cream or an imidazole cream are the mainstay of treatment. Systemic therapy with fluconazole, itraconazole, or terbinafine is rarely required for severe or refractory cases.

Therapy for mucosal infections is typically accomplished with topical or systemic triazole antifungal agents. A significant problem with mucosal disease is its propensity for repeated relapses, particularly among immunocompromised hosts and persons with human immunodeficiency virus (HIV) infection. Chronic suppressive therapy is usually unnecessary, but occasionally employed in select cases, with the associated risk of emerging resistance.

As normal members of the gastrointestinal tract flora, Candida species become pathogenic in the oropharynx and esophagus in patients with various risk factors, including impaired cell-mediated immunity (e.g., HIV infection, chronic mucocutaneous candidiasis, stem cell and solid organ transplant recipients), diabetes mellitus, extremes of age, or esophageal motility disorders. The use of certain medications, including progesterone, broad-spectrum antibiotics, or immunosuppressive agents is also a contributing factor in many cases.

Oral candidiasis most commonly presents as creamy white plaque-like lesions on the oropharyngeal mucosa or tongue surface. Candidiasis lesions are typically painless, but atypical and more symptomatic forms may exist, such as erythematous or pseudomembranous plaques (erythematous candidiasis), Candida leukoplakia, or hyperplastic candidiasis. Angular chelitis, a painful condition with associated cracking and erythema at the oral commissure, can also be a result of Candida infection. As with cutaneous candidiasis, oropharyngeal candidiasis is usually a clinical diagnosis. Cultures are not usually recommended because of the potential for positive results due to colonization. For treatment of mild disease, clotrimazole troches or nystatin suspension for about 7 to 14 days are recommended first-line agents. For more moderate-to-severe oropharyngeal candidiasis, including patients with HIV infection, systemic therapy with low-dose oral fluconazole for 7 to 14 days is generally recommended. Infections that are refractory to fluconazole should be managed with another systemic antifungal agent, such as an extended-spectrum triazole or echinocandin.

Esophageal candidiasis often presents as dysphagia or odynophagia, usually with retrosternal pain. Clinically, it can be difficult to distinguish Candida esophagitis from other causes of esophagitis, such as cytomegalovirus esophagitis, herpes simplex virus esophagitis, esophageal ulcers, eosinophilic esophagitis, or pill esophagitis. The presence of oral thrush coupled with dysphagia or odynophagia has relatively good predictive value for esophageal candidiasis, and a therapeutic trial is a reasonable alternative to endoscopy in such patients. Empirical therapy should include a systemic antifungal for about 14 to 21 days; typically fluconazole in oral or parenteral form is prescribed. In rare circumstances, an alternative antifungal agent such as an echinocandin, extended-spectrum triazole, or low-dose amphotericin B may be required. In refractory cases, endoscopy with mucosal brushings or biopsy may be necessary to confirm the diagnosis, test for antifungal resistance, and evaluate for other potential concomitant pathogens or disorders (Figures 172.6 and 172.7). 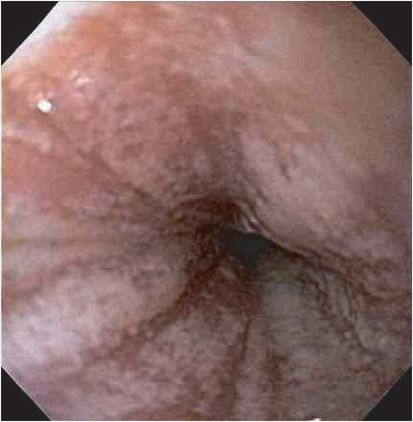 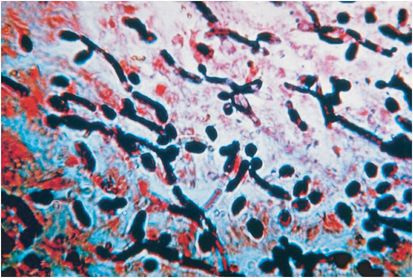 Figure 172.7
Only gold members can continue reading. Log In or Register to continue