In adults, acute parvovirus infection may be more serious. Adults have more rheumatic complaints than do children, and there may be frank joint inflammation and a pattern of distribution and chronicity mimicking rheumatoid arthritis; occasionally rheumatoid factor will be present. In most cases, symptoms resolve within a few days or weeks, but in some individuals the arthropathy and systemic symptoms become chronic and debilitating, although there is no joint destruction. The pathophysiology of the rheumatic manifestations after B19 infections is not well understood, but symptoms usually can be addressed with conventional anti-inflammatory drug therapy. Parvovirus is not a cause of rheumatoid arthritis.

Transient aplastic crisis is caused by parvovirus infection in patients who have hemolytic anemia, compensated hemolysis (as in many cases of hereditary spherocytosis), or an increased demand for red cell production (iron deficiency, acute hemorrhage). B19 briefly interrupts erythropoiesis in most persons infected but without consequence because of the long survival of circulating red blood cells. Transient aplastic crisis is manifested by anemia, reticulocytopenia, and red cell aplasia in the marrow. There may be moderate thrombocytopenia and neutropenia in addition to the severe anemia, especially in patients with functioning spleens. The syndrome may be accompanied by marrow necrosis and has been fatal, especially in young children. As the anemia is self-limited, transfusion is adequate therapy. Specific antibody production terminates the episode and likely prevents recurrence.

Parvovirus infection of the pregnant woman may be transmitted to the fetus. Midtrimester events have been best characterized; first trimester infection may result in abortion, and third trimester infection has not been associated with adverse outcomes. Infection of the fetus is predominantly in the liver, the site of red cell production; the heart may also be affected (fetal myocardial cells express P antigen). Untreated, the fetus develops severe anemia and heart failure leading to the massive edema of hydrops and death at birth or shortly afterward (Figure 191.2). In utero blood transfusions have apparently been successful in a few instances; however, untreated fetal infection need not result in mortality or morbidity. As ultrasound diagnosis may not be definitive, a conservative recommendation is to document progressive hydrops on serial testing before intervention. 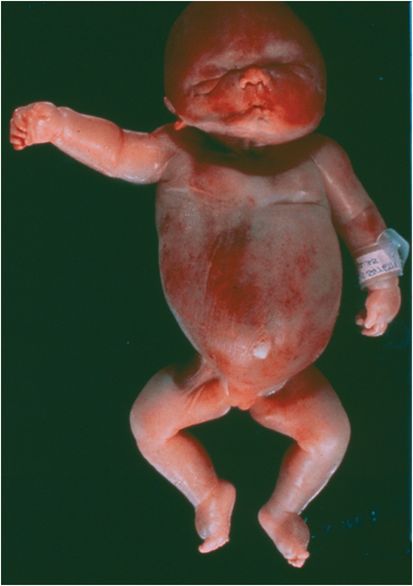 Congenital parvovirus infection after transfusion treatment of hydrops can produce chronic anemia from birth. Only a few infants have been described: In all, virus was localized to the marrow and did not circulate, and gene amplification was required to detect the low levels of B19 DNA. The pathology of the marrow was erythroid hypoplasia (Diamond–Blackfan anemia) or erythroid dysplasia resembling congenital dyserythropoietic states. Immunoglobulin therapy has not been effective.